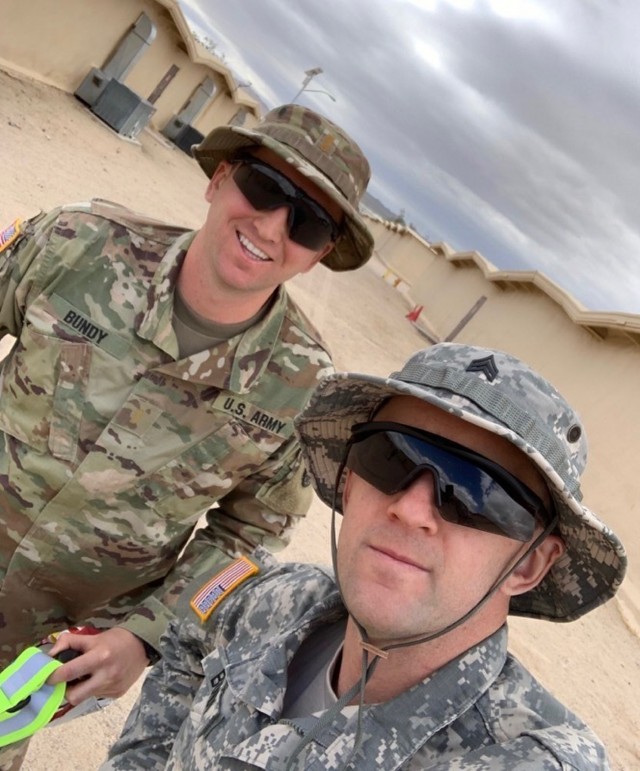 All three work for the Mountain Home School District. Matt and Nathan both teach at Mountain Home High School and Zane is a substitute teacher who hopes to have his own classroom someday. In addition, all three either have or are currently serving in the military.

Matt retired from the U.S. Air Force. Nathan and Zane both serve in the 116th Cavalry Brigade Combat Team’s 2nd Battalion, 116th Cavalry Regiment, headquartered in Caldwell. For the next couple of weeks, both are participating in the brigade’s National Training Center at Fort Irwin.

“I was raised on the idea of serving my country,” said Nathan, who enlisted into the Idaho Army National Guard in 2012 as a 35F intelligence analyst.

Nathan is the intelligence section’s senior noncommissioned officer. His team’s job is to help analyze intel Soldiers in the combined arms battalion collect to help his battalion commander make good decisions on the battlefield.

It’s a position that’s vastly different than Zane’s job, who leads a platoon in Idaho’s only infantry company from his Bradley Fighting Vehicle.

“Serving together gives us a new dynamic in our relationship,” Nate said. “It’s a new common ground and shared experience, but we’re also on different sides of the Army as an enlisted intel Soldier and an infantry officer.”

Zane joined the Idaho Army National Guard in January 2017 and later earned his commission in November 2017.

“I saw how great of an opportunity Nate had to be in the Guard so I thought I would follow,” Zane said.

At his commissioning ceremony, Nathan was the first to salute his younger brother of four years.

“I was really proud of him when he commissioned,” Nathan said.

Zane said he doesn’t get to see much of his brother during unit operations but that it’s always good to see him when the two cross paths. Both agreed that serving in the National Guard provides them with experiences they don’t get to have in the classroom as teachers.

“I enjoy both jobs,” Nate said. “Being able to serve part-time is a great experience.”

The 116th Cavalry Brigade Combat Team is completing a month-long rotation at the National Training Center to build unit readiness and increase Soldier proficiency in their wartime missions. The unit will train against a near-peer opposing force provided by the Army’s 11th Armored Cavalry Regiment. More than 4,000 Soldiers, from more than 30 Army National Guard states, are participating in the exercise.

Brennan and Bundy sworn in to City Council
January 10, 2018