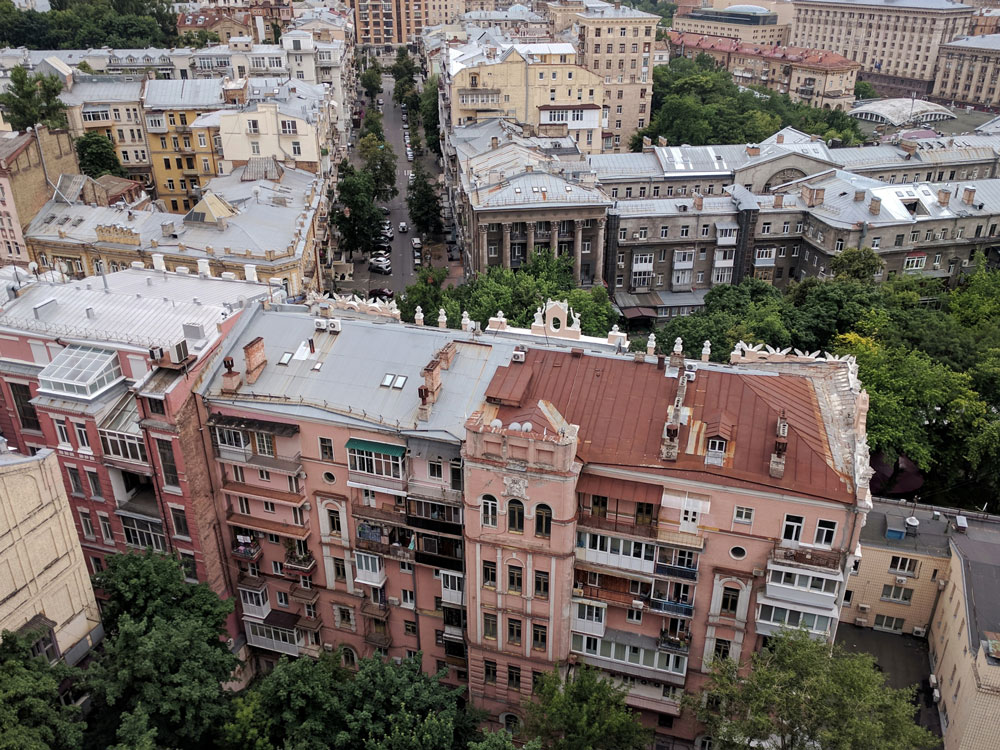 Most of us are familiar with Kiev, Ukraine, but what about Mariupol City? This is where I had the opportunity to participate in the “Teachers for Global Classrooms” program this past spring. I taught in a Lyceum, which is comparable to the German secondary Gymnasium school type. The school was filled with motivated students preparing for their future studies at universities in Ukraine and throughout Europe. While most will remain in Ukraine, many pupils desire to study in England, Germany and France. I have participated in educational programs in Jordan, Germany and now Ukraine and these experiences continue to give me great cultural and educational experiences to share with my students and colleagues back in Mountain Home, Idaho.

After landing in Kiev, our group of eleven teachers from throughout the United States was taken on a walking tour of the city. Signs and posters for the upcoming soccer event, Euro 2012, were everywhere and one really felt as if he had arrived in a truly modern European city. Kiev is a very cosmopolitan city and I noticed the ALDI grocery store and the BOSCH tool store on my walk. I even considered stopping at the Kiev branch of Volksbank to get some Ukrainian Hryvnas (local currency) so I could enjoy Senf on my Wurst at the Biergarten on the corner. That evening on our walk to the world famous Kiev Ballet, where we would be enjoying a great performance of Carmen, I noticed the German flag waving in the wind. I had found the German Embassy! I promptly went to the guards in their blue German uniforms and greeted them, Guten Tag. Wie geht es Ihnen? They politely responded with, Sehr gut, danke! and then promptly informed me the embassy was closed to visitors for the day. Pech! But in front of the embassy is a portion of the Berlin Wall where anyone can see and touch this reminder of communism and the former division of Europe.

After a couple of days in Kiev, the real adventure began. I got on a train in Kiev and readied myself for a 16-hour train ride to the southern part of Ukraine. I was on my way to Mariupol, on the Sea of Asov, about 50 miles from the Russian border. I don’t speak Russian or Ukrainian and no one on the train spoke English. One of my cabin mates spoke a little German, so I was able to locate water and restroom facilities. Upon arrival, my host teacher, Andriv, picked me up at the train station and we were off to school.

My first activity was a European Club assembly. The students gave presentations and cultural performances reflecting many European countries to include the German speaking countries of Germany, Austria and Switzerland. The European day continued with a press conference for the students. I was pleased to find out that I was the guest of honor to be interviewed for the press conference! Even though it was European Club day, they asked me all kinds of questions about the American school system, my students, American government and my thoughts on European issues. This particular Lyceum specializes in language study. I worked with young people who had English as their “profound study.” Instruction in the school is in Russian, but all students are required by the government to also pass exams in the Ukrainian language. In addition, the students focus on one foreign language and also study an additional foreign language. The majority learns English as the profound study, but many had German as their primary foreign language. It seemed a pretty evenly split between German and French as the primary additional language after English. As I taught the classes, I was impressed with their ability to communicate in English. A primary reason for my visit was to give them the opportunity to communicate with a native speaker. I got to be very good friends with many of the students and it was fun in the evenings as I would go for a walk through the city to see students and converse with them outside of class.

After getting to know the German teacher, I was invited to participate in the German language class. The teacher had lived in Germany for a year on an exchange. The class was conversation based, and I noticed the teacher was using Goethe-Institut materials. She was teaching this particular class at the European Union level of B1. I also noticed that in addition to GoetheInstitut texts, her computer and projector also had Goethe-Institut stickers on them. It was apparent that the Goethe-Institut is very active in helping language programs around Europe. It was fun; many of the same students that I had been working with in English were now comfortably speaking German and discussing German culture. I added a few remarks in German and think I could almost pass the German class in Ukraine! Most of the students assume Americans speak only English, so it was fun to challenge that stereotype a bit.

This experience and my other international experiences continually reinforce my desire to interact with teachers, students and people from various backgrounds and cultures. These experiences have given me many stories to share in my classroom and with colleagues in seminars and other educational forums. Many thanks to TOP for all you do in supporting and fostering global education.