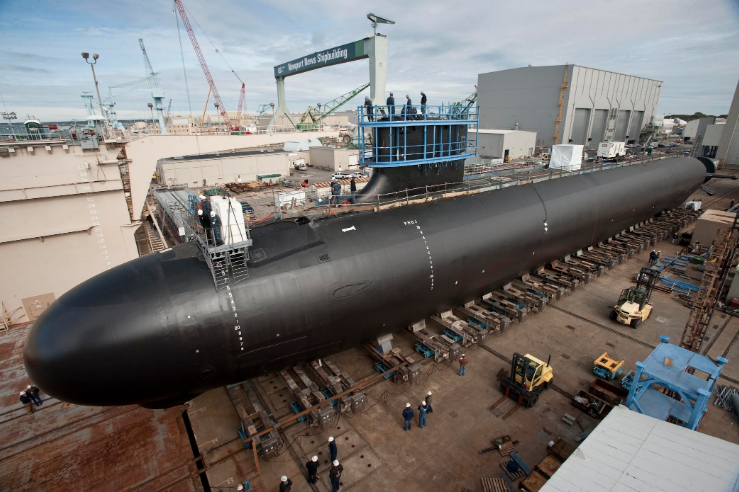 A new bill recognizes the significance of the United States Navy naming a ship after the Great State of Idaho. House Concurrent Resolution 3 was printed and will be heard in the Transportation & Defense Committee. The fast attack nuclear submarine is the 5th ship to be named the USS Idaho and the first ship in over 100 years to be named such. Idaho has strong ties to the submarine community of the U.S. Navy. INL was the training ground for the first nuclear submarines and Bayview, in Northern Idaho, has contributed greatly to the development of submarine design. The submarine is scheduled for commissioning in 2023. 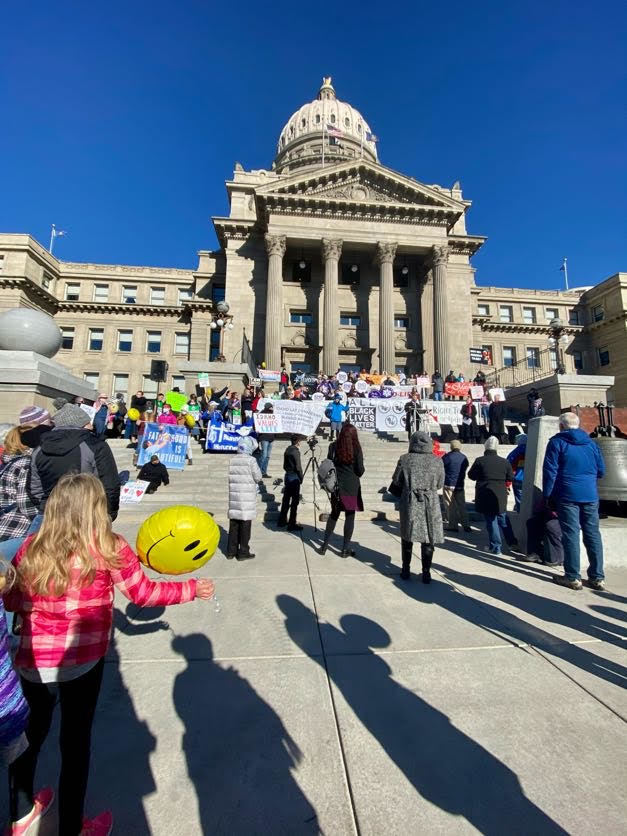 Right to Life for Idaho hosted their 48th Annual Boise March for Life on January 23rd. The yearly march, hosted by the oldest pro-life organization in the state, was scheduled to coincide closely with the anniversary of the Roe v. Wade Supreme Court decision on January 22nd. Intended as a celebration of life, hundreds joined together to walk from Julia Davis Park to the Capitol building and listen to speakers share their personal stories of why they became pro-life and how it has affected them. Among the attendees were several legislators. 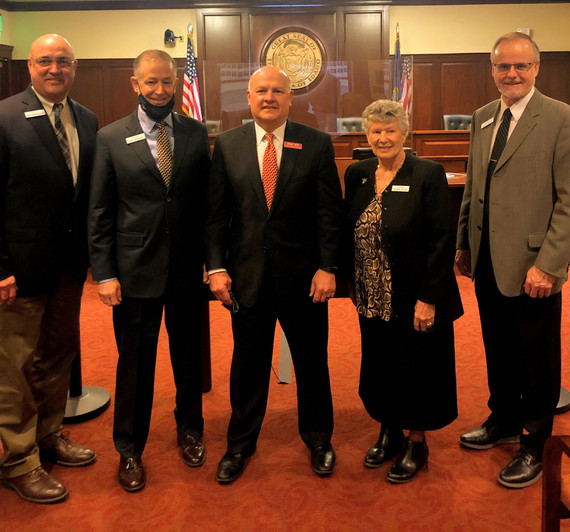 The Senate Agricultural Affairs Committee was pleased this week to welcome a presentation from the Idaho Potato Commission (IPC) featuring their annual report for 2020/2021, which included challenges faced in 2020 and pandemic impacts.

During the Covid-19 pandemic, Idaho potatoes were deemed the most economic food with sales going off the charts as families stocked up during those uncertain times. Forty million pounds of potatoes made their way on and off store shelves through retail sales alone, making potatoes the third-most coveted item behind toilet paper and hand sanitizer. By the end of 2020, the IPC hit a record revenue and added over $46,000 to their reserves.

They also shared their marketing program built to meet their main marketing goals: to stimulate demand for all Idaho potato-branded products both domestically and internationally; to teach consumers that Idaho potatoes are nutritious; heart-healthy, and relevant for today’s lifestyles, to build consumer loyalty; and to increase grower understanding and support for the IPC.

For the second time, the Senate Judiciary and Rules Committee passed the Idaho Wrongful Conviction Act unanimously out of committee. Senate Bill 1027, sponsored by Senator Ricks, would provide compensation for those who are exonerated after a wrongful conviction. Compensation is limited to only those who are truly innocent, but yet were still convicted and forced into prison against their will. The conditions for eligibility are very narrowly written and currently only six past exonerees have been identified as qualifying and it’s open for future exonerees.

Last year, the original Wrongful Conviction Act also passed the Senate unanimously but was vetoed by the Governor after the legislature adjourned. After working with the Governor’s office to address minor concerns, the bill sponsor, Senator Doug Ricks from Rexburg, said the updated bill has some improvements, and the emergency clause will make it effective when the Governor signs it. Past exonerees will have two years to file a claim, and any future eligible exoneree will have two years from the date of their exoneration to file.

The Senate committee heard emotional testimony of Christopher Tapp, the inspiration for the bill. Tapp served 20 years in prison after being wrongfully convicted for the rape and murder of Angie Dodge in 1998. With help from the Idaho Innocence Project, Tapp was ultimately exonerated when DNA evidence matched Dodge’s neighbor Brian Leigh Dripps to the DNA found at the crime scene.

“Being in prison is as horrible as you can imagine, and being there when you are innocent is that much worse. I missed out on 20 years of my life. I wasn’t able to spend my father’s last years with him or go to his funeral when he passed. … I was released with no more than the clothes on my back, left completely relying on family and friends to help me while I tried to rebuild my life.” Tapp told the committee.

The revised bill now heads to the Senate floor.

Universities Gather from Across the State 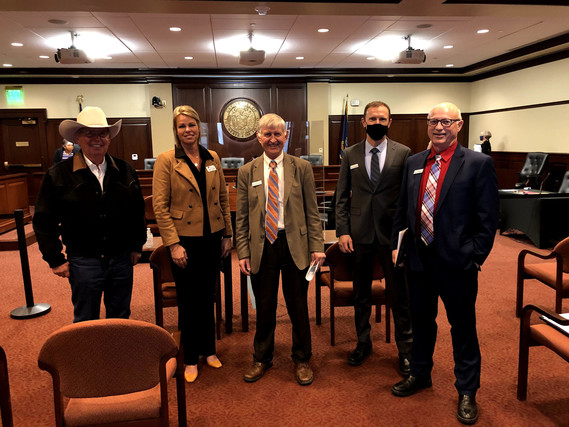 SJR101 Debated by the Public

Senate Joint Resolution 101 received spirited debate this week in the Senate State Affairs Committee. Introduced by Senator C. Scott Grow from District 14 and co-sponsored by twenty-two other Senators, SJR101 would amend the Idaho Constitution to prohibit the production, manufacture, transportation, sale, delivery, dispensing, distribution, possession, or use of psychoactive drugs. Exceptions would be allowed for prescription drugs approved by the U.S. Food and Drug Administration and drugs used in clinical trials. Citizens gave testimony for and against the legislation in a three-hour hearing on Monday.

S1017 Heads for the Floor of the Senate

Senate Bill 1017 (S1017) passed the Senate Health and Welfare Committee on January 27th, 2021. The bill relates to uniform controlled substances and revises definitions to make technical corrections in order to include synthetic drugs. It also provided corrected terminology and provisions for controlled substances. It clarifies the definitions and identifies the differences of marijuana and CBD that are approved by the United States Food and Drug Administration (FDA).

Both the House and Senate heard the annual State of the Judiciary Address from the chief justice of the Idaho Supreme Court on Wednesday. It was the first presentation from new Chief Justice Richard Bevan. Like the Governor’s State of the State message on Jan. 11, the chief justice’s address was broadcast remotely into both the House and Senate chambers, where members watched, after adjourning for the day.

The State of Small Business

Legislation at a Glance

H0026: This legislation would eliminate the use of the habitual status offender definition and prevent status offenders from being detained in secure facilities instead of juvenile shelter care facilities. The bill was passed out of the House Judiciary, Rules, and Administration and is filed for its Second Reading in the House.

HCR002: This concurrent resolution would lift the restrictions on group sizes of ten or more imposed by the Governor’s emergency declaration. The resolution was passed out of the House State Affairs with a Do Pass recommendation and filed for its Third Reading in the House.

HJR001: This joint resolution would amend the Idaho Constitution to allow the Legislature to convene itself into an extraordinary session within 15 days of a written request of 60% each of the House and Senate membership. The bill passed the House with a vote of 51-18-1 and was introduced to the Senate. It was referred to the Senate State Affairs.

S1006: This legislation would consolidate current statutory requirements for literacy intervention and update provisions in alignment with the Task Force recommendation for focusing on the importance of having every student reading at grade level by the end of grade 3. The bill was passed out of the Senate Education Committee with a Do Pass recommendation and is filed for its Second Reading.