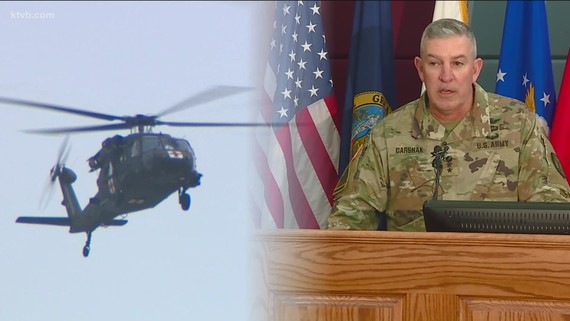 The Idaho Legislature mourned the passing of three Idaho Army National Guard pilots who lost their lives in a crash near Boise on Tuesday. The personnel were training in a UH-60 Blackhawk helicopter when military officials lost contact with them at 7:45 PM. An Emergency Transmitter Locator device aboard the helicopter activated shortly after 8:00 PM, and the crash site was found at 12:15 AM Wednesday morning. An investigation into the cause of the accident is ongoing.

The Idaho Senate Majority Caucus released a statement Wednesday that the tragic loss “serves as a sobering reminder that our soldiers put their lives on the lines every day to protect the freedoms we hold so dear. The profound sacrifice they and their families make for our country is a debt we can never truly repay.”

Governor Little shared Wednesday that, “Our hearts are heavy today as we mourn the loss of three brave and talented pilots killed during service to our state and nation. Their tragic deaths leave an emptiness in the lives of their families and loved ones, the entire National Guard community, and all of us.” He asked Idahoans to join him in praying for the lost and their loved ones. Flags are advised to be flown at half-staff until the final memorial service is complete.

On Tuesday, Senate Republicans released a statement that they were “pleased Governor Little responded to our continued call for reducing restrictions and regulations on Idaho businesses and families by moving Idaho into a modified Stage 3 Healthy Guidance today. When comparing this Stage 3 guidance to the Governor’s prior Stage 3 orders, it is encouraging that criminal sanctions have been removed in today’s recommendations.

We will continue our efforts in the Senate to address statutory changes to limit statewide mandates and allow greater local control. We remain opposed to one-size mandates that diminish personal accountability for health decisions, curtail family participation in extracurricular events, effectively quarantine and isolate healthy individuals, and single out Idaho businesses for enhanced regulation. Thank you to the citizens who have encouraged review of these statutes. We know there is still much to be done and we will continue to work hard for the people of Idaho”

House Concurrent Resolution 2 was adopted by the House with a vote of 55-15-0 and would lift the restrictions on group sizes of ten or more imposed by the Governor’s emergency declaration. It was referred to the Senate State Affairs Committee.

The Idaho Voices for Children organization visited the Legislature virtually this week for Foster Care Awareness Day. Child welfare advocates gave video presentations to relate their first-hand experiences with Idaho’s foster care system, and they also hosted panels to further educate legislators on how they can help improve the welfare of Idaho’s children. As always, the goals were to find ways to reduce the number of children entering foster care while still strengthening the foster care system to ensure children receive the support they need. The importance of this work has only grown with the increasing size of Idaho’s population. 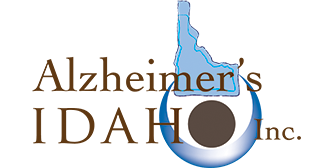 It was Advocacy Week for the Alzheimer’s Association at the Capitol. Advocates from across the state met with legislators and urged them to support funding for an ongoing State Dementia Coordinator and encouraged participation in the Walk to End Alzheimer’s Disease.

Advocates commented that, “As the number of Idahoans living with Alzheimer’s and other dementia is expected to grow, as a State we need to address the escalating needs of this population and their caregivers.” This being said, the Alzheimer’s Association Greater Idaho Chapter is currently the leading voluntary health organization in Alzheimer’s disease care. Through its statewide network, the Alzheimer’s Association offers a broad range of programs and services, including a 24/7 Helpline at no cost to families. It also funds advancements in research to prevent, treat, and ultimately cure this disease, and advocates on related legislative issues.

If you would like more information regarding Alzheimer’s disease or other dementia issues, please contact the local Alzheimer’s Association office at (208) 206-0041 or visit alz.org. 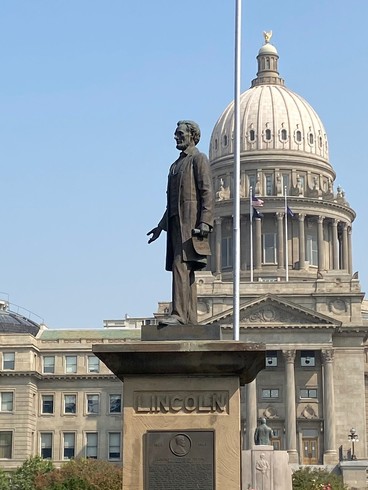 A bill proposing tighter control of historical monuments and their location, renaming, alteration, and movement was introduced to the House State Affairs Committee this week. H0065 would add a section to Idaho Code stating that any monument or memorial on a state property cannot be relocated, removed, disturbed, or altered without the approval of the Idaho Legislature through a concurrent resolution passed by both chambers. The legislation also preserves the names of historic figures and historic events memorialized in/or dedicated to public schools, streets, bridges, structures, parks, preserves, or other public areas of the State or subdivisions that were in place prior to July 1, 2021. The legislation was proposed by Representative Okuniewicz.

Legislation at a Glance

H0016: This bill would amend Section 46-1008 of Idaho Code to limit the duration and consequences of a disaster emergency declaration by the Governor. The Governor would not be able to suspend any Constitutional rights of Idaho citizens, prevent them from working/providing for their families, or alter or suspend any provisions of Idaho Code. Emergency declarations would only last for thirty days unless extended or terminated by the Idaho Legislature. Any existing emergency declarations that have lasted longer than thirty days would be automatically terminated. The bill was printed and filed for its Third Reading in the House.

H0026: This legislation would eliminate the use of the habitual status offender definition and prevent status offenders from being detained in secure facilities instead of juvenile shelter care facilities. The bill passed the House with a vote of 70-0-0 and was referred to the Senate Judiciary and Rules Committee.

H0038: This bill would amend Section 54-5707 of Idaho code to allow certain prescription drugs to be prescribed through telehealth services in compliance with federal law. The bill passed the House with a vote of 70-0-0 and referred to the Senate.

H0066: Full disclosure of anticipated tax increases on bond and levy ballots would be required under this bill. Information that is not relevant to the bond or levy in question, such as any past/proposed/current bonds, levies, or other matters, would not be allowed on the ballot. The bill passed the House with a vote of 46-24-0 and was referred to the Senate.

HCR002: This concurrent resolution would lift the restrictions on group sizes of ten or more imposed by the Governor’s emergency declaration. The resolution was adopted by the House with a vote of 55-15-0 and was referred to the Senate State Affairs Committee.

HJR001: This joint resolution would amend the Idaho Constitution to allow the Legislature to convene itself into an extraordinary session within 15 days of a written request of 60% each of the House and Senate membership. The bill passed the House with a vote of 51-18-1, was introduced in the Senate, and was referred to the Senate State Affairs Committee.

S1006: This legislation would consolidate current statutory requirements for literacy intervention and update provisions in alignment with the Task Force recommendation for focusing on the importance of having every student reading at grade level by the end of grade 3. The bill passed the Senate with a vote of 35-0-0 and was referred to the House Education Committee.

S1009: This bill would include the State Fire Marshall and State Fire Marshal deputies in the same definition as firefighters under the Public Employee Retirement System. The bill passed out of the Senate Commerce and Human Resources Committee and is filed for its Third Reading.

S1017: The bill relates to uniform controlled substances and revises definitions to make technical corrections in order to include synthetic drugs. It also provides corrected terminology and provisions for controlled substances. It clarifies definitions and identifies the differences between marijuana and CBD that are approved by the United States Food and Drug Administration (FDA). The bill was passed out of the Senate Health and Welfare Committee with a Do Pass recommendation and is filed for its Third Reading.

S1027: This legislation would compensate individuals who were wrongfully convicted and imprisoned with $62,000 per year of incarceration or $75,000 per year if incarcerated on death row. Those who were put on the sex offender registry wrongfully would receive an additional $25,000 per year on the registry. Exonerees would be given a two-year window to file a claim from the moment they were formally exonerated by a court. The bill passed the Senate with a vote of 35-0-0 and was referred to the House.

S1039: This bill would allow school districts to award a Workplace Readiness Diploma to graduates who have completed career technical education programs. The bill passed out of the Senate Education Committee with a Do Pass Recommendation and is filed for its Third Reading.

SJR101: This joint resolution would amend the Idaho Constitution to prohibit the production, manufacture, transportation, sale, delivery, dispensing, distribution, possession, or use of psychoactive drugs. Exceptions are allowed for prescription drugs approved by the U.S. Food and Drug Administration and drugs used in clinical trials. The bill passed the Senate with a vote of 24-11-0 and was referred to the House.